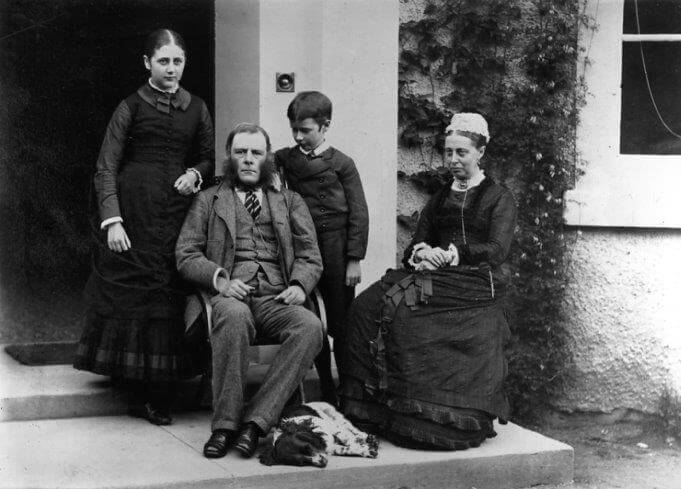 Here at The Lake District Protection Society, Helen Beatrix Potter has always been and will continue to be our main inspiration. She adored the Lake District and did all she could to protect the nature and heritage that resides here, and we intend to continue her incredible work.

Whilst Beatrix Potter will forever be known as the author of her famous books ‘The Tales of Peter Rabbit’, for us, it is important she is admired and remembered for the great entrepreneur and philanthropist she was.

Potter’s love for the Lake District came from her holiday visits as a child and by 1896, the Potters had spent at least seventeen summers here. Potter described the Lakes as ‘pastoral landscape backed by mountains. It strikes me that some [of its] scenery is almost theatrical, or ultra-romantic.’…and we couldn’t agree more.

In the summer of 1986, the Potter family stayed at a country house in Near Sawrey in the Lakes. During their stay, Coachman David Becket, who accompanied them, stayed with Farmer Henry Preston at Hill Top Farm.  This would become the first of many farms Beatrix bought from 1905.

In November of 1986, Potter had noted her summer stay in the village as ‘nearly perfect a little place as I ever lived in, and such nice old-fashioned people in the village’. When Hill Top Farm came on to the market in 1905, she bought the farm using the royalties from her first sale of books.

In the years that followed, Beatrix published various additional ‘The Tale of’ books, written with Mr. Warne before he sadly passed.

In 1909, Beatrix went on to buy her second farm, Castle Farm located opposite the Hill Farm. The desire to own land within the Lake District for the protection and preservation from development was encouraged by Mr. William Heelis who was a local solicitor.

Beatrix and Mr Heelis went on to marry in 1913 and moved into Castle Cottage, on Castle Farm. Whilst residing here, she became more involved with the community and served on committees working to improve rural living.  She also founded a nursing trust to improve local health care and developed her love for breeding and raising Herdwick sheep.

In 1923, Potter bought a disease-ridden sheep farm, Troutbeck Park, the largest farm in the Lake District, and restored it to agricultural health. The Heelis’ was known to be enthusiastic supporters of land conservation and early benefactors of the National Trust. Beatrix became the de facto land agent for the Trust and managed many farms throughout the Lake District alongside her own.

Her final book was ‘The Tale of Little Pig Robinson’ published in 1930.

On 22nd December 1943, Beatrix Potter sadly passed away in her home, age seventy-seven. She bestowed her fifteen farms, over 4,000 acres of land, the original copies of her books, Herdwick sheep, and art to the National Trust. In doing so, she worked to ensure all were protected.

We hope from this short abstract you can see just why Beatrix Potter is such an inspiration to us here at The Lake District Protection Society and why we will continue her ethos to ‘purchase to protect’ we can help to restore habitats and protect mother nature in honour of the late Beatrix Potter.